← back to the blog

This is a little adventure designed to populate a hex in a hexcrawl. It's essentially six little vignettes around each of the towers with a climax in the castle in the middle. You could easily add additional details but in this version I've just kept it to the essence of what you will find in these areas, leaving it to a gm to fill in the rest. My starting inspiration was just coming up with the names of each of the towers, without any real idea of how they would connect or what the names implied. 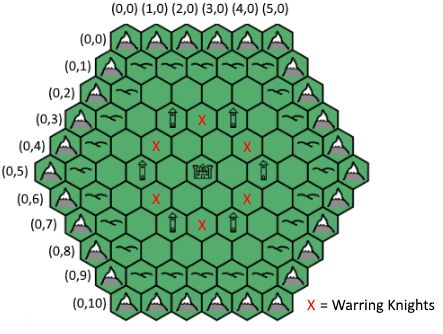 In a valley encircled by harsh peaks stand six towers around a great keep. Around the towers are the war torn remnants of a once populous city. Great empty plains intersperse collections of burnt out rubble, and warring factions of knights can be found clashing all throughout. These knights are sworn to one of the six headless kings. The kings themselves keep to their towers. And no-one goes to the keep.The Knights are also found in the hexes surrounding their tower hex.

(3,7) Tower of Ochre: Everything here is covered in Ochre paint in various states of drying. The tower especially. Near the tower there is an art show where Ochre Knights can be found admiring and critiquing various canvases painted solid Ochre.Ochre KnightsHD 2AC 14ATK 1d6

Anyone next to an Ochre Knight when it dies gets spattered with Ochre blood that causes Umber Knights to attack you. It can be washed off with water and a strong cleaning agent.

Attacks you if you have anything coloured Umber visible. Will demand that you allow them to paint you with Ochre paint.Ochre KingThe Ochre King has no head. He sits in the Ochre tower. Many ochre artworks are hung all throughout the tower. He will ask you to pledge your allegiance by permanently dying your hand Ochre.The Ochre King won’t fight you. If destroyed he will reform within the day. If attacked his knights will defend him.His borders with the Umber King are in dispute and he wants this resolved in his favour. If this is done, he will reward you with an Ochre painting worth 500gp (though it is just all ochre, there’s something about this painting that everyone agrees is better than the rest). He also asks that you go to the Keep and unlock the Ochre Crown in the throne room. With the Ochre Crown he will be able to kill the Umber King once and for all.

(5,7) Tower of Umber: As the tower of Ochre but coloured Ochre instead. The Umber Knights and Umber King are mummies and crumble to dust when slain (this dust clings like the Ochre blood).  The Umber King has lost his head and his body. He is a collection of bandages in the shape of a man. Any food or drink he touches turns to dust. There is a large graveyard outside his tower, he will reward you with a collection of fine wines (300gp) that he cannot touch if you find his body among the unmarked graves. 1 in 100 chance to find the body randomly. The body counts as undead.

(3,5) Tower of the Holy Dark: A commune of priests, mainly female, who want to convert your shadow to their religion. If they are allowed to talk uninterrupted to your shadow for 10 minutes they will convert it and it will begin following them, giving you -1 max HP in daylight.

Priest of the Holy Dark

HD:1AC:10ATK:1d4If attacked, their shadow and any other converted shadows will attack you.ShadowsAs Priest, +1 HD and drain 1 point of strength on hit.Queen of the Holy DarkShe has fashioned a head for herself out of shadow, to replace the one she lost. Casts Darkness and Gaseous Form if attacked, but leaves the fighting to her peons. If she is destroyed her body reforms out of darkness within the day.She wants the shadows of all the headless kings barring the Fool King (she wants to offer the shadows to the fool king, but won’t mention that). She offers you her hand in marriage as reward, no not to you, to your shadows. Though she will give you an appropriate dowry, say 100gp each? She also laments the fact that she won’t be able to wear her crown of opals on her wedding day, she would reward you ever so greatly to go and fetch it from the keep.

(7,5) Tower of the Yesterday King: There’s a feast! You’re all invited. His knights will hold you at rapier point and then insist you take an invitation. If you refuse they will try to brand or cut the invitation into you.

Knight of the Yesterday King

HD:2AC:12ATK:1d8The FeastOh it is a splendid affair. The feast starts at 8pm. At 10pm if you had entered the feast between 8 and 10, a chiming noise is heard and you will be transported back to where you were at 8pm. No-one else knows time has been reset like this. There are all manner of valuable goblets and plates and decoration, totalling 1000gp. When time is reset anything you took will be back in its original place.The headless Yesterday King is not found at the party. After enough prying you will discover that he’s upstairs awaiting the birth of his son.

The way upstairs is blocked by some knights, but theres lots of wine around or, if you prefer, windows on the second story.Upstairs, the Yesterday KingThe Yesterday King is upstairs wringing his hands. The sounds of the feast fade away. The intermittent screaming of a woman is heard. The Yesterday King will maintain stilted conversation. At around 10pm he will rush upstairs at the sound of a death scream, his accompanying knights will bar your ascent. The chime is heard soon after.His wife is dying, giving birth to a dead child. He does anything he can to ring the eternal chime he carries so she will be saved. The Yesterday King, if told of his future, will request his Diamond crown from the keep, it is the only way he can save her.Eternal ChimeIt can be used to go back in time 2 hours, but in the first loop will not realise this has happened and so they will be stuck in a loop until they can be shaken out. The loop occurs within a 500m radius.(3,3) Tower of the Familiar Face:Knight of the Familiar Face:HD:4AC:12ATK:1d6/1d4 (Two attacks. Second attack drains 1 pt of Cha, after 2 drained they have your face and will flee)The Knights here are face vampires. They suck away your face onto their own, leaving you with a different face that no-one will recognise. You’ll have to convince anyone you’ve met before that it’s you. The Knights will try a variety of methods to do this. Once they have stolen a face, they will bring it to their King in the tower, where they will spend a long time modelling the face for him like they are at a photo shoot. If he likes the face, he will cut their head off and put it where his head used to be.King of the Familiar Face:He is never happy with his face and will whine about it. If you could bring him the Queen of the Holy Dark’s shadow face somehow he will give you all the rings from his fingers and all the clothes in his wardrobe. They are fashionable, valuable things. ~800gp. Though what’s really missing from his look is his ruby crown, locked away in the keep(5,3) Tower of the Fool: The first couple times you approach this tower, it won’t be as it seems. Roll on the table below.

MummersThe Fool King does not have Knights, he has mummers. They will play pranks that are mean, inane, and/or dangerous (to themselves and/or others). They diewithout putting up a fight. They love a good joke. Or a bad joke. The only joke they don’t like is one about the Keep. If the Keep is mentioned then they will start screaming. Don’t even joke about that. That’s too far. Roll below for an example prank, or make your own.

Fool KingThe Fool King is only a head. His body is somewhere else. The fool king will gladly pay you for various nonsensical tasks or offer you nonsensical deals. Reacts similarly about the keep.

(5,5) Keep of the 5 Kings: Deserted and looted barring the throne room. Here there is the Headsman, and 5 crowns.HeadsmanHD:4d+4AC:16ATK:1d8 axe (save or be beheaded; not magical, just skilfully wielded), 1d6 punch (2 attacks)The headsman is the huge animated body of the Fool King. He will wordlessly warn against entering the throne room, if he suspects foul play he will attack.SkullsThe headsman guards the shackled skulls of the 5 headless kings. The skulls each have a beautiful jeweled crown atop them but the crowns are shackled down to a stone table. The shackles also have metal eye covers that cover the eye sockets of the skulls. If the shackles are broken or the eye covers lifted, the King whose crown it was will be released as a powerful lich.

These 5 plotted to overthrow the Fool King who thought them among his most trusted allies. They beheaded him but such was the power of his rage at the betrayal that his headless body beheaded them all and his head shouted a curse upon them to fit their crimes. The Ochre King orchestrated a slander campaign against the Fool King, killing artists sympathetic to him and encouraging those against him. The Umber King took food from the poor, causing them to starve in order to drum up further unrest. The two would bicker about whose technique had the most success. The Queen of the Holy Dark used magics to drape the 5 in shadows so they could ambush the fool king. The Yesterday King killed all the Fool King’s heirs. The King of the Familiar Face was the Fool King’s closest friend, he showed himself to the king as a distraction. The crimes of each is written on a plaque below their skull in an ancient script. Treat them as high level magic users, each with a special ability.
The Ochre King has the power to steal your sight.
The Umber King can make you starve in one hour with a touch.
The Queen of The Holy Dark causes shadows to rise up as shades, even the shadows of inanimate objects.
The Yesterday King causes stillbirths wherever he roams.
The King of the Familiar Face causes betrayals.

The crowns are their phylacteries.